What are the different ways to transport something that’s 10-feet long, 30-inches wide, and 4-inches thick?

These were the dimensions of an average standup paddleboard which means that it can get extremely complicated to find a compromise between convenience and possibilities of transportation. Although the average SUP weighs around 25lbs, it’s the volumetric dimensions that put many potential buyers off.

The reality is that not all paddleboarder lives right by the lake or ocean, instead, there’s quite a bit of traveling involved to enjoy the sport on a regular basis.

While you can get an inflatable SUP when you value portability as your main criteria, there are still these occasions where you need to travel further distances with the board. Solid or blow-up SUPs – they are often the same when it comes to short-distance transportation.

Take a look at the guide below in which we introduce the most common ways to transport a SUP:

1. Get an inflatable board

This leads us to prove the point that the average inflatable paddle board out there is quite durable, and by looking at what the best SUP brands on offer, it is mind-blowing to see all the different disciplines and awesome features made for inflatable boards.

To top things up – some paddleboarding disciplines can only be performed by an inflatable board – like whitewater or river surfing. The same goes for multi-person paddleboards.

ISUPs offer an indistinguishable alternative to solid SUPs in performance, therefore you might want to consider getting an iSUP when you don’t fancy getting a pair of crossbars, and a set of SUP racks for frequent transportation.

+ Cheaper.
+ Easy storage.
+ Fits in most cars.
+ No need for roof racks.
+ You’ll get a workout from inflating the board by a hand pump.
+ Loads of different boards at many budgets.

– Need to inflate & deflate each time.
– Not as rigid and durable when it comes to sharp punctures.

All paddle boards have multiple carry-handles on the deck – in the middle, and on both ends. This makes carrying the board much more convenient, especially
doing that by two persons.

While you can cover shorter distances alone, there are some factors that don’t make it as easy. The average SUP weighs around 25lbs (10kg) which isn’t too bad for shorter distances, but it’s the wind and inconvenient hold on the board (+paddle) that makes it a nuisance carrying experience for longer distances.

Foot trailers are a popular choice among many paddlers – there are 1 and 2 board models available that literally take off the load from your wrists and shoulders and by the time you get to the water, you still have the full energy to continue.

One of the most basic and most convenient ways to transport a heavy SUP is by a foot trailer. SUP trailers doesn’t cost much, and they help a ton.

The number of rack brands increases each year, and so does the quality and number of features on an average SUP rack.

Kayaks and canoes are often carried on the car’s roof which has led many brands to come up with some awesome, high-end solutions. Although you’ll be needing a pair of crossbars for the carrier, it is the safest and often only option to carry a non-inflatable paddle board.

+ Boards can be locked on the racks.
+ Availability to use your existing crossbars.
+ Safe, as these racks are designed to do one thing only.
+ You can carry your non-inflatable paddleboard and not mess around with inflating and deflating each time.

Can you carry an inflatable board on roof racks?

It is not advisable to carry an inflatable paddle board on the roof for longer distances and at speeds reaching 60mph.

As the board has to be tied down tightly so it wouldn’t fly off the racks, it might damage the blow-up paddle board in the long run. Leaving your SUP board out on the sun for extended periods of time is another consideration on why you shouldn’t haul an iSUP on the roof.

While there are many folks that still do it (at their own risk) take into consideration that while the board is inflated to its maximum pressure, it’s the heat from the sun that increases air pressure inside the board which could lead up to seams blowing up. Also, the UV rays in some parts of the world can get quite high and damage the outer shell when left out there for longer.

You also don’t want your board to ‘taco’ or crease during the drive which can again damage the construction of an inflated board. Many beginners carry the SUP on top of the roof without a proper carrier which can also scratch the paint on the roof.

Is it safe to carry multiple SUPs on top of each other?

Yes, many paddlers carry multiple paddleboards on roof racks, but it’s often the case with inflatable boards. While you can technically load multiple boards on a single carrier, you sure won’t have a relaxed drive without constantly thinking about the boards flying off the roof.

A bicycle SUP trailer is another great solution for those who live close by the water. The construction on those carriers is often quite basic – it’s got a 2-wheeled trailer and another mount on the saddle post for the other end of the board. The swivel mechanism on the bike’s attachment helps to turn the bike freely.

– You’ll have to invest in a proper bike lock.
– Some tight trails can be difficult to cross. 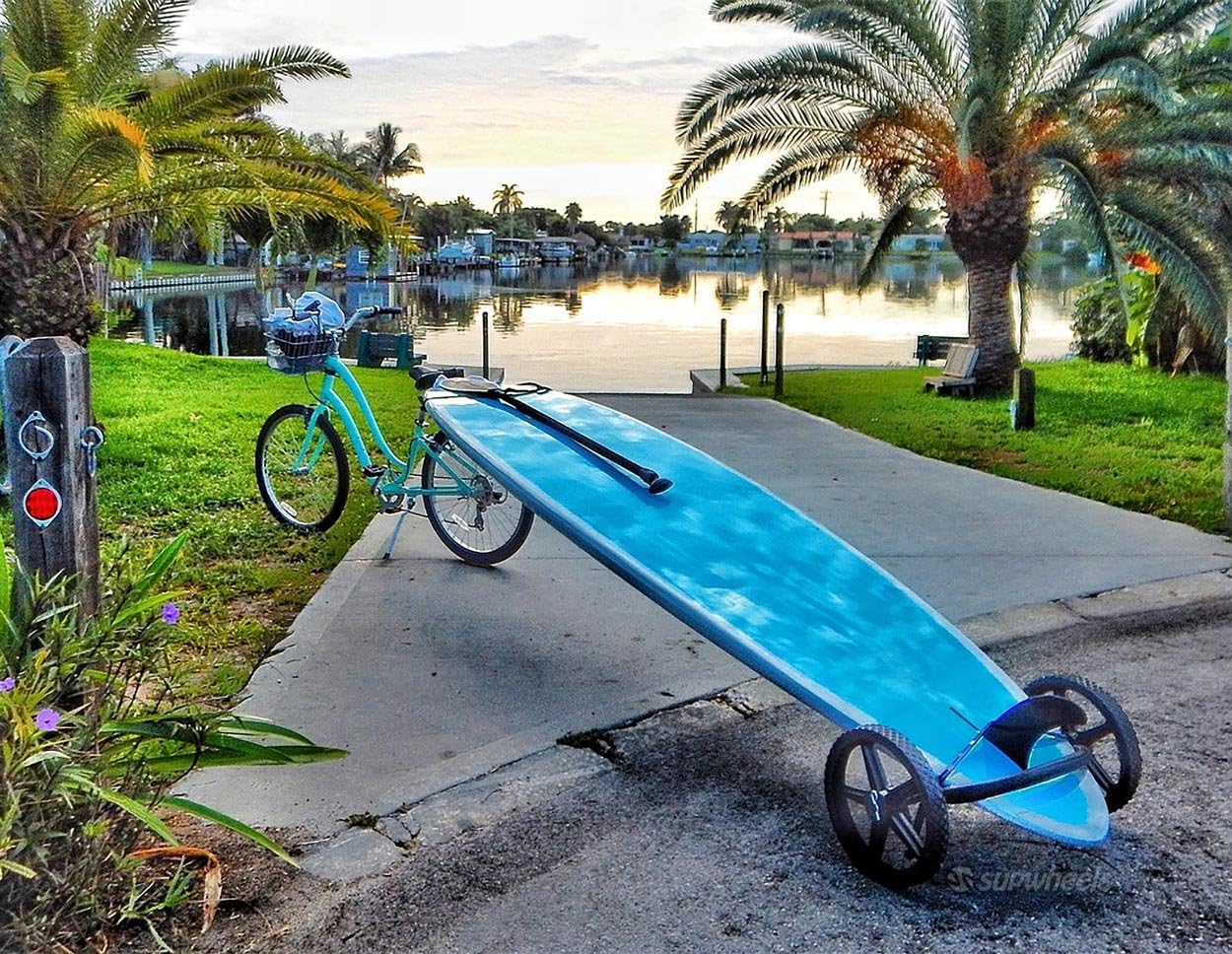 Although both are basically boards to be ridden in the water, surfboards are much thinner and often shorter which makes them easier to carry by bicycle or a scooter. While almost all surfboards fit inside most car types out there – that’s not the case with SUP boards.

All iSUPs fit inside a carry bag which means you can ride or walk to the beach with a large backpack.