As an intro to surfing’s lingo, we recommend watching this legendary surfer express his hype. Take a look at this video to know is waiting for you down below: 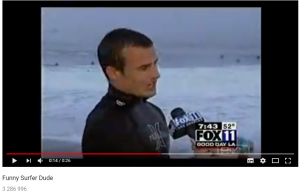 Knowing the surfing terms will help you navigate the occasions freely with other surfers. We all know it is hard to describe the stoke when surfing, so hopefully, you’ll find relief to your needs right here! 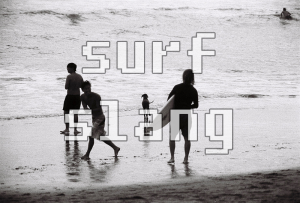 We have selected five main categories in which all the surfing terms will be found:

Backdoor – A way of entering wave under the peak, hollow section.
Bail – An action of failure during the surfing / Bailing – jumping off or letting go of the board
Baggies – Loose boardshorts/boardies
Barney – An inexperienced surfer
Backside – Riding a wave when a back is towards the wave
Beach Bum – A person/surfer who spends a lot of time at a beach
Beach leech – Someone who keeps borrowing others gear for surfing
Benny – Not a local surfer
Betty – Old-school word to describe a female surfer
Boardies – Boardshorts
Bodysurfing – Surfing the waves with your body only. Generally performed by using swim fins
Booger – Boogieboarder, bodyboarder
Bottom turn – A maneuver done at the bottom of the wave to turn back up
Bogging – Staying too far back of the board surfboard makes the board stalls and slow down
Blue room – The space and view under the breaking wave
Bro – Brother, a friend, brah
Burn – To steal other surfers wave, drop in on someone

Carve – A sharp turn at the edge of the wave
Caught inside – Inside, A surfer who has got stuck inside the unsafe breaking point
Charge – Aggressive type of surfing. Charging
Chowder – A floating turd
Clucked – Being scared of waves
Cutback – A maneuver where a surfer turns back at the wave towards the breaking point
Cutting off – Surfing the wave that somebody was already surfing

Dawn Patrol – Early morning surf session
Drop-in – Dropping on a wave that someone is already surfing. Burn
Drop – A maneuver where a surfer drops down the steep face of a wave
Duck diving – Diving under the upcoming wave with a surfboard
Dude – A cool enough person who is into board riding sports. Snow, surf or skateboarding

Fakie – Riding with the tail part of the surfboard in front
Far Out – Surf expression which means overly unexpected
Flippers – Fins used for swimming, boogie boarding
Floater – Riding the top of the wave and turning down again
Frontside – Surfing a wave when facing the wave
Frube – A surfer who does not catch a wave the whole session
Fins out – A maneuver where the fin/s are out of the water after a sharp turn

Eat it – Getting wiped out by a wave
Eskimo Roll – Turtle roll. Flipping with the board sideways to dive under the incoming wave
Endless Summer – A series of classic surf movies. Must watch for every surfer

Hang five/ten – A style of riding the longboard with five / all ten toes over the nose of the board
Hang eleven – Hang ten naked, performed by a male surfer
Hang loose – The meaning of shaka
Heat – A competitive part in surf contests

Kahuna – A talented, master surfer. Word comes from Hawaii
Kick out – A maneuver of finishing the ride and going over the top of the wave
Kook – An inexperienced surfer who thinks he/she is good

Layback – An advanced maneuver where a surfer lays down on the breaking wave when making a turn
Late takeoff – The latest time to start surfing
Landlord – A shark
Line-up – A spot in the ocean where surfers line up to catch the waves
Lip – Tip or the edge of the breaking wave
Localism – Territorial behavior at a surf break
Logger – A surfer riding a longboard
Long John – A long-legged wetsuit and no arms.
Locked in – When a surfer gets caught in the incoming breaking wave
Lull – A time between the sets where the waves don’t break
Licked – Getting wiped out by the wave

Natural – Natural foot, a surfer who rides a board with a left foot in front

Peak – A spot in the ocean where waves peak both ways
Pearling – Nosediving the board when leaning too much forward
Pitted – Barreled
Pop-up – Rising movement on the board. From paddling to a stand
Priority – Right of way surfing the wave. Whoever is closer to the peak and surfable section of the wave
Pumping – Up and down movements on board to generate speed, also meaning for a good swell. Surf’s up

Rash Guard – A special shirt used to prevent getting the chest-rash from rubbing on the waxed board
Regular / Regular foot – A surfer who rides the board with a left foot on the front
The Right of way – A surfer with priority to catch the wave – whoever is closest to the breaking wave
Rip – To rip. Masterful surfing

Shaka – Surfers hand gesture. Meaning hi, bye or hang loose
Snaking – A sneaky way paddling in and around the lineup to get the right of way catching the wave
Snap – Sharp turn off the top of the wave
Stall – Slowing down the ride or braking to catch up with the wave
Surf’s Up – When the weather is solid for surfing. A great swell is arriving
Switch-foot – A surfer who can surf with a left or right foot in the front
Swell – Movements of water in the oceans generated by winds. Swell running to a beach generates waves

Take off – An action where the surfer begins to surf the wave, after the pop-up
Tandem surfing – Two or more surfers riding one board
Tow-in – when a surfer is towed into a wave, generally used in big-wave surfing using jet-skis
Tombstoning – When a surfer is a deep enough underwater, and the leash is pulling the board underwater
Trimming – An action where the surfer is looking for the best section to gain speed on the wave
Turtle Roll – A technique where a surfer flips with the board to dive under the incoming wave

Yew! – Yell surfers use to describe an upcoming wave or a great performance

Crease – Damage to the board from an impact

Fin – A fin-shaped plug attached at the bottom tail-part of the surfboard. Designed for steering
Funboard – A mal, minimal. Mid-size surfboard. Something between a short- and a longboard
Foamboard – A tall and soft surfboard that generally beginner surfers use
FCS – Fin Control System. Type of removable fin system
Fish – A short, wide, and thick surfboard with two fins. Designed for having fun with some performance
Foil – A type of board that can be ridden on flat or shallow waves

Leash – A cord attached to the board. Between surfers leg and the board. Leggie
Longboard – Type of surfboard. Long, thick and wide with a round nose, generally 8-10ft in size
Legrope – A Leash. Leggie
Log – A longboard

Rocker – The curvature of the board from tail to nose

Shaper – Surfboard designer. A person who shapes the board

Quiver – A collection of boards a surfer has

Rail – The edge of the surfboard

A-frame – A wave that breaks both ways, allowing the surfer to choose the direction of surfing
Backwash – When a wave sweeps up to the beach and returns to the ocean

Charging / Cranking – When a particular beach is getting a powerful surf
Close-out / Shut down – A wave that’s closing exactly towards the shore, and is not rideable.  The wave is breaking straightforward, not sideways
Crest- The highest point/top of the wave
Corduroy – A set of incoming waves in a distance
Curtain – An outside part of the barrel
Curl – The area of the wave where it’s breaking

Banks – A sandbank at a beach break
Barrel – A wave that tubes when breaking
Beach break – A wave that breaks at a beach, generally over sandy bottoms known as sandbars
Bono – A tidal bore
Bomb – A larger or a heavier wave out of the regular set

Groundswell – A perfect swell that has traveled thousands of miles. 15+ second wave period
the Green room – The inside of the tube or a barrel
Going off – Charging

Hollow – A wave that barrels. Allows riding the wave inside of the famous tube

Impact zone – An area where the waves are breaking

Lip – The sharp edge of the breaking wave in a barrel

Off the hook – Good waves and forecast

Party wave – More than one person riding the wave
Peelers – A type of wave that peels smoothly when breaking, perfect for longboards
Pit – The most hollow part of the barrel
Pocket – Most potent part of the wave
Point break – A surfable spot in the ocean that has a rocky bottom
Pumping – When the waves are great, perfect weather for surfing

Reef break – A wave that breaks over a shallow reef or a rocky bottom
Rip / Rip Current – A dominant spot in the ocean where the incoming water flows back into the sea
Rogue wave – Unexpected, a suddenly appearing huge wave way over the forecast

Sandbank – Solid sandy formation at a beach break that allows producing great waves by swells
Section – Rideable part of the wave
Set – A group of waves. Wave train
Set waves – A group of waves regularly more massive than the usual within the set
Shoaling – Effect by which surface waves entering shallower water change in wave height
Shore break – A wave that breaks very close to the beach line
Shoulder – Unbroken section of the wave, a surfable area
Slab – Heavy reef break where water comes from deeper water into very shallow waters
Soup – The foam from the broken wave, whitewater
Spit – Spray of water that exits at the end of a tube or a barrel
Surging wave – A type of wave that does not break due to the fast-moving from deep to shallow waters
Swell – Collection of waves moving away from a storm in the ocean

Tidal wave / Tidal bore –  A massive movement of water formed by the funneling of the incoming tide into a narrow bay or a river
Tsunami – A destructive wave caused by an earthquake, landslide, underwater explosion, etc
Tube – Barrel. The shallow section of the wave

An extensive list of understanding the wave height can be found on the turf research. Have a look!

Blown away – A good forecast ruined by wind
Choppy – Windy conditions
Clean – Ideal conditions where the formation of the ocean looks neat
Firing – Going off
Glassy – A weather where the water looks clean as glass. The condition with no wind or little wind (nulltuul conditions, null=zero, tuul=wind)
Gringo hour – When the surf is gnarly
Heavy – A powerful swell
Mushy – Slow waves
Pumping – When the good swell has reached the break and you can hear the waves breaking
Sunset glass-off – A glassy condition right during the sunset
Synoptic chart – Shows weather conditions

The wind is the second important factor or element that affects the quality of the surf. Since swells generate waves and swell on the other hand by the winds on the oceans – there is a different kind of winds that affect the final form, and they are onshore, cross-shore or the offshore.

Onshore wind – A wind that blows from the water towards the shore. Onshore wind will ruin the quality of the wave by blowing off the nicely carved edges by the swell

Cross-shore wind – Wind that blows sideways on the shore
Offshore wind. Offshore wind is the best for surfing – since it will blow from the land towards the ocean – pushing the water and giving the final stages of waves – the most desirable shape.
Choppy – An unconstant blow of wind that can ruin nice and glassy conditions. Bad conditions.

There you go, we hope this article helped to increase your vocabulary, and you could feel more confident in a group of experienced surfers. A surfers terminology, surfing slang, or what not this would be called, is getting updated now and then so make sure to check back sometime.