As the waves form by the swells, winds, and many other factors – the perfect time for surfing is often somewhat limited. On a perfect day – when the surf’s good, many dedicated surfers are eager to go in for a session and often find themselves surrounded by the crowds.

Surfing is a sport for individuals, not for teams

The conception of “common sense” is widely misunderstood by both beginner and experienced surfers. The best way to respect the surfing culture is by following the worldwide surfing rules, in other words, the surfing etiquette.

A term that has a slightly negative tone. Localism is when a particular group of local surfers (who live and have been surfing their home break for ages) is not welcoming the newcomers. Localism happens in many surf spots all around the world, some even leading to:

Even if you follow the surfing lineup rules and are well aware of all the etiquette, some locals dislike you for no reason anyway. 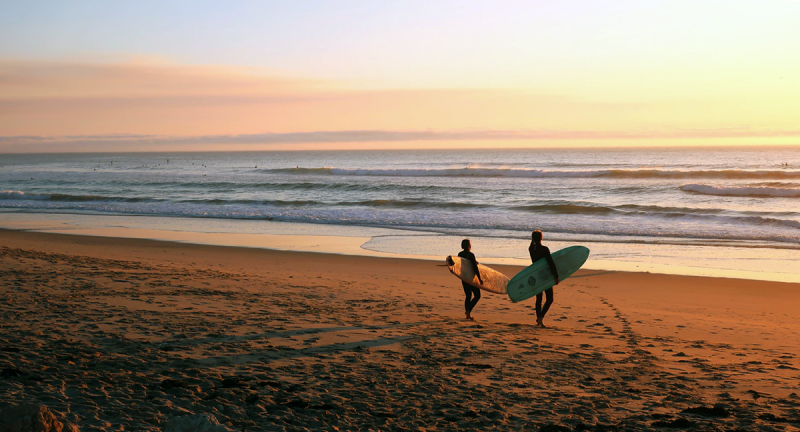 Every culture has specific rules they follow that have accumulated over the years. So is with surfing, which has a clear code of conduct to follow.

Be sure to follow the rules below and not violate the unwritten gentleman’s rule.

Do not paddle through the surfable area where people are surfing the waves. Always paddle towards the back of the line-up so you wouldn’t disturb anyone planning to catch the wave.

By following surfing lineup etiquette everyone has equal rights to surf the wave.

2. Do not bail/ditch your surfboard!

The most dangerous aspect of surfing is when there’s a loose board on the surf. A surfboard can knock anyone unconscious, which is the worst scenario that could happen when surfing.

Letting go of your surfboard, or in other words, bailing the board, can injure fellow surfers and also damage the surfboards on top of that.

To Avoid That: Do whatever it takes to grab onto your leash when you have to let go of the board. On small to medium waves, it’s great to hold the leash of the surfboard as close to the board as possible, but whenever there’s a big wave just about to break on you, there’s really no other way to duck-dive deep and hope for the best.

Surfing right of way, also known as the priority is the most known and essential rule of surfing.

The person closest to the peak of the wave has the right to surf the wave.

Whenever you will be paddling for a wave and see somebody already riding it, quit. Even the attempt to padde for a wave ruins the wave’s formation.

Note: When the peak of the wave breaks both ways (A-frame wave), two surfers can ride the same wave but in a different direction. It’s best to yell out which way you are going to let the fellow surfer know of your plans.

Note: When there’s more than one surfer paddling for an unbroken wave, the one closest to the peak gets to ride it. If you have been waiting to catch a wave for a long time and decide not to take it at the last second, it’s also not a good idea. Surfing in Mentawai‘s if you don’t catch the wave you were paddling in for, you have to paddle to the end of the line-up.

4. Never drop-in on someone

When somebody has already caught a wave or stands closer to the peak to ride it – do not drop in and start riding the wave after they already started. It is the most common mistake beginners, and kook‘s do.

In case you dropped in on someone’s wave – make your priority to exit the wave as safe and smooth as possible.

Usually, the line-up is generated around the most consistent spot at the beach, not for the biggest one at the end (bomber).

Snaking is an act where a surfer is moving around the lineup in order to get a better position. Oftentimes paddling through the lineup.

Although sometimes a large wave can start breaking let’s say 30-50feet away from the first person of the line-up, you can go up there with a bigger board in the hope to catch those bombs.

Say sorry or correct your mistakes immediately when you have to.

What else can you do to respect other surfers?