When surfing first started out in the 12th century Polynesia – it was first called wave sliding. Fast forward to 2022 – there are way too many disciplines to surf the wave one could think of. Surfing is a sport and a fun recreation performed in breaking waves.

Down below we’ll explain some of the possible ways to surf a wave.

Requirements to surf a breaking wave:

The ‘original’ surfing is performed on a typical surfboard where a surfer paddles for a wave by their hands, then stands up on a surfboard, and starts to the wave.

The main goal of surfing is to catch the wave before it starts to break toward the shore, and surf in the pocket of a wave as long as possible. There are many surfing styles and board types to perform various styles of riding.

When talking of riding the wave – windsurfing might not be the first thing to come to your mind.

Surfing the waves with a windsurf surfboard is a completely different class, performed only by advanced and expert surfers. Although windsurfing is mainly performed where there’s a great degree of wind on the sea – its main focus is freeriding rather than the riding a breaking wave.

According to Wikipedia – there is about 1.5 million kite surfers in the world.

I bet we’ve all seen those hectic skimboarders running from the shore, dropping their finless board on the water, and riding some of those shore-break waves? While the main focus of skimboarding is to ride on flat water – skimming (instead of surfing the waves) you can technically surf a wave with a skimboard.

One of the newest disciplines in the advancing water-sport trend is foil surfing. The stand-up design allows the rider to glide with the moving wave by the kinetic energy generated by the underwater swell. This type of board has a deep fin on the bottom which allows riding on choppy waters and messy conditions with ease as once the board has built up some speed it increases the board out from the water.

One of the closest disciplines to the original wave surfing is the growing trend of paddle boarding.

Although surfing is not the primary purpose of why people get a SUP, there are many surf-specific SUPs made by popular SUP brands. Paddlers are more often seen in the line-up in most surf locations for a good reason – it is easy to catch waves on a stand-up paddleboard. Paddle boarding has the advantage of staying in the water for longer periods of time as you are not halfway submerged in the water, nor do you have to duck-dive under the incoming waves. 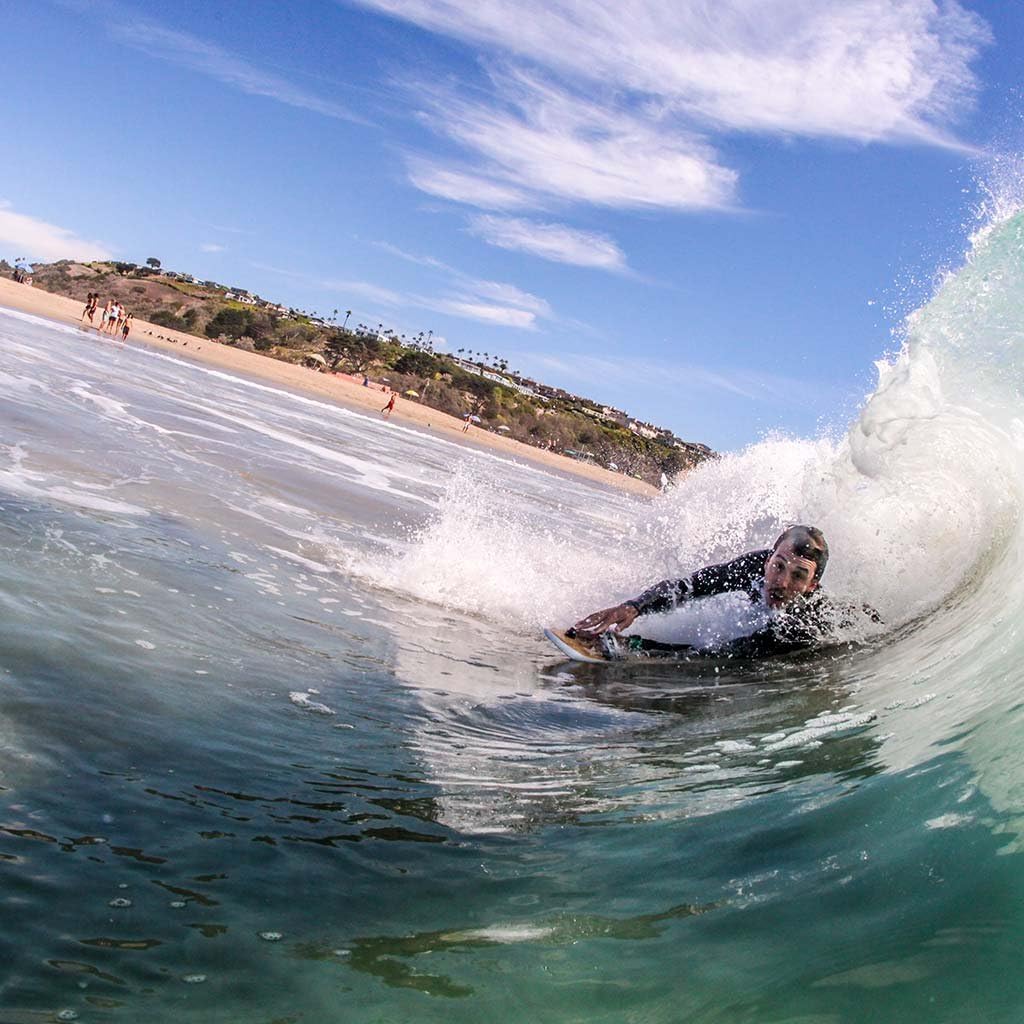 Bodysurfing dates back to 18th century Polynesia and it is still performed by many surfers and non-surfers alike.

A full bodysurfing gear consists of a pair of swim fins and a hand plane. This type of surfing allows to surf small to medium waves, and shore-breaks alike. Bodysurfing is a ton of fun and most likely on the cheapest (and simplest) ways to surf.

Wake surfing is another popular water sport outside the ocean waves.

Wakeboarding is inspired by kitesurfing without the kite, usually performed in a wakepool with moving cables and a rope to hold onto. Wake surfing, on the other hand, is performed behind a moving motorboat. A rope is used to pull the wake surfer on the wave, although a bunch of advanced surfers ditches the rope once they have started to ride the wave that’s generated by the moving boat.

Bodyboarding is an alternative sight on surf breaks performed by a boogie board. Bodyboarders use swim fins/flippers to move in the water.

Although boogie boarding is probably where most kids first started out, there’s still a minority of bodyboarders who surf massive waves. Riding a bodyboard allows the surfer to ride small and barreling too fast and hollow waves easier than surfing a full-size stand-up surfboard.

Knee-boarding started out as an alternative to wakeboarding and waterskiing where a kneeboarder is towed behind a motorboat by a rope. In waves, kneeboards have the advantage of sharp turns and having fun in small to medium-sized waves without standing up on the board. Kneeboard surfboards have fins for increased traction.